Last weeks Parashah (Chayei Sarah) we saw a ton of types and patterns. Abraham (a type of the Father) send his faithful servant (Ruach Hakodesh) to find a bride for his son (Yeshua). Abraham insisted that his servant did not take a bride from among the Canaanites but rather he was to return to Abraham’s family in Mesopotamia and seek one there.

This picture actually brings to mind the verse in John where we see that Yeshua was sent unto His own people.

John 1:11 He came unto his own, and his own received him not.

Yet another pattern, but unlike with Rebekah, the vast majority of Israel rejected Yeshua.

This week’s Parashah is about Isaac and Rebekah’s family and how the promise given to Abraham and then to Isaac, would be passed onto Jacob.

Isaac (Yitshaq) was 40 years old when he and Rebekah (Ribqah) were married.  They went nearly 20 years without having children because Rebekah was barren. Isaac prayed unto God on his wife’s behalf and God answered his prayer by o 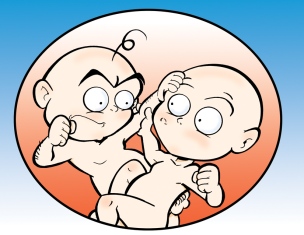 pening Rebekah’s womb. After Rebekah conceived the children “travailed” within her. When she asked God about it He revealed to her that she was in fact pregnant with twins (or two nations). God told her that that the promise given to Abraham and Isaac would go to the younger rather than the older.

When Rebekah gave birth the first child came out “red, all over like an hairy garment“. They named him Esau (Esaw) which literally means “shaggy or rough“. The second child came out grasping the heel of the first so they named him Jacob (Ya’aqob) which means “supplanter” from a root word meaning “heel”

Esau later grew to be a skillful hunter, while Jacob was according to the KJV was a “plain” man dwelling in tents.  The word for “Plain” as defined by the Brown-Driver-Briggs Lexicon is;

To be perfect or complete, (one who lacks nothing in physical strength, beauty etc.)

That definition casts a different light on Jacob than what is generally portrayed by using the word “plain“. It would seem that Jacob may have actually been a well-rounded individual vs. the puny momma’s boy that is depicted in many Sunday school lessons.

We also see that according to the text, Isaac loved Esau more than Jacob, but Rebekah loved Jacob.  Some indicate that Rebekah favored Jacob because she believed the promise given her by God. If that is the case then the question becomes, why didn’t Isaac believe the message? Either way favoritism of a parent toward one child over another, never brings peace, and by this account we can see that because of the favoritism of their parents, a deep wedge is driven between these two brothers.

In this Parashah we also see how Esau “despised” his birthright as the first born. This may well speak to the spiritual condition of the home, since the birthright was generally associated with being the spiritual leader of the family. Although there isn’t much detail given in this account, the book of Jasher indicates that Esau could have been fleeing because he had just killed Nimrod. If that is the case, it definitely makes more sense when he says in Genesis 25:32 – “Behold, I am at the point to die: and what profit shall this birthright do to me?”

The act of Esau despising his birthright apparently voided out his access to the blessing as well. We see in Hebrews he is actually associated with fornicators and profane people.

Hebrews 12:16-17 Lest there be any fornicator, or profane person, as Esau, who for one morsel of meat sold his birthright. 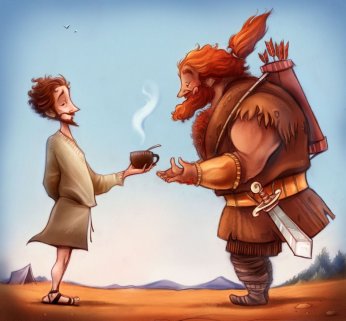 For ye know how that afterward, when he would have inherited the blessing, he was rejected: for he found no place of repentance, though he sought it carefully with tears.

This is a very important lesson for us to learn from.  Since we have been given an inheritance (birthright) by the promise of God to Abraham, and through faith look forward to its fulfilment. We too should be careful to not despise the promise given by God through Yeshua, which like Esau, would cause us to miss out on the blessing even though he sought it with tears.  Once we have learned the truth, should we reject the Messiah for the baser things of this life, just like Esau rejected his birthright for a bowl of lentils, I find it hard to believe that there is any room for repentance.

Hebrews 6:4-6 For it is impossible for those who were once enlightened, and have tasted of the heavenly gift, and were made partakers of the Holy Ghost, And have tasted the good word of God, and the powers of the world to come, If they shall fall away, to renew them again unto repentance; seeing they crucify to themselves the Son of God afresh, and put him to an open shame.

Impossible is a strong word, and I believe it speaks to just how important it is that we hold fast to the promises of God, and to the Faith of Yeshua. But I also thank God that we don’t have to do it in our own strength.

The story goes on to show how Isaac seems to follow in the footsteps of Abraham, and makes the same mistakes which his father made. This is a perfect example of how the sins of the father are often passed on to the son. Not that God holds the children accountable for that acts of their parents, but by our choices, we influence our children and by setting a bad example for them we can cause them to stumble in the same areas that we also stumbled. Abraham’s mistakes and behavior no doubt influenced Isaac and his decisions, and we see that when he was confronted with the same situation, Isaac made the same mistakes that his father made.

We need to set a godly example for our children. Even when things can be hard or even terrifying, we need to walk in faith trusting God. So when our children are faced with those same challenges (and they will be) they can look back at our example and hopefully make the right decision. Because there is only One blessing, there is only One Messiah, and there is only One way to realize salvation, and that is through faith in Yeshua, the Son of God. And if we live a life yielded unto Him, the example that we leave for our children is a solid foundation for them to build upon.

Proverbs 22:6 Train up a child in the way he should go: and when he is old, he will not depart from it.

Below are the videos and links to this weeks lesson.

Hope you all have a blessed week.