Numbers 15:38 Speak unto the children

of Israel, and bid them that they make them fringes in the borders of their garments throughout their generations, and that they put upon the fringe of the borders a ribband of blue:

This command was given on the heals of event that had the whole congregation of Israel in an uproar.

Numbers 15:32-36 “And while the children of Israel were in the wilderness, they found a man that gathered sticks upon the sabbath day. And they that found him gathering sticks brought him unto Moses and Aaron, and unto all the congregation. And they put him in ward, because it was not declared what should be done to him. And the LORD said unto Moses, The man shall be surely put to death: all the congregation shall stone him with stones without the camp. And all the congregation brought him without the camp, and stoned him with stones, and he died; as the LORD commanded Moses.”

Whether or not this guy was just gathering sticks, wood for a fire, or if he said “well it looks like we are going to be here for a while, so I think I’m just going to build a house“…  Who knows what he was really doing, because the word for “sticks” can also be translated as planks, timber, wood etc.  The issue here is that he was in direct violation of the command to keep the 7th day as a Sabbath of rest.  This command was literally spoken by God Himself when He appeared before them at Mt. Sinai and is the fourth of the Ten Commandments.

Before I get into the whole Tzitzit issue, I want to address a few things concerning the commandments of God and their relevance for us as believers today.  In modern Christianity there is a popular thought that Yeshua “fulfilled” the Law therefore doing away with it, or at least our obligation to obey it.  However, Yeshua makes it very clear that the Law was not going anywhere.

Matthew 5:18 “For verily I say unto you, Till heaven and earth pass, one jot or one tittle shall in no wise pass from the law, till all be fulfilled.”

As a matter of fact, Yeshua not only kept the Law perfectly, He came teaching it perfectly filling FULL the true meaning and intent, or the heart of the Law. I am not advocating a works based salvation because Scripture makes it abundantly clear that if we look to our “works” for righteousness rather than having faith in Yeshua, we would have to literally live perfectly to have any hope of salvation, which is an obvious impossibility. It is clear that we are saved by GRACE, through FAITH, however that does not negate our responsibility to be obedient to God. If for nothing else to show our love for Him.

So by tossing out the commandments of God we could be putting ourselves in a pretty bad place. As a matter of fact if we continue in the text in Matthew we see that Yeshua Himself address this very issue.

Right there in verse 19 the Son of God Himself says that if we break just one of the commandments andteachothers to do so, we will be called ‘Least” in the Kingdom of Heaven.  It is interesting to note that the word used for “least” can also be translated as “cursed” which actually takes us all the way back to Deuteronomy 11.

So if you are already walking in the faith of Yeshua (Jesus), and you believe that He is the very Son of God, and that He died for your sins; ask yourself this simple question. Are you walking in obedience as He commanded? If not, maybe its time to stop listening to the mainstream spiritual teachers, and listen to the Word of God. Put aside all that garbage that is keeping you from so much blessing. Obedience is not a burden, it is not legalism, it is not bondage.  Rather it really is liberating, and just as God promised, it is definitely a blessing. If you have any questions concerning this topic and would like to learn more, please feel free to contact us by clicking HERE.

Okay, so what is a Tzitzit, anyway…

A floral or wing-like projection, i.e. a fore-lock of hair, a tassel:—fringe, lock.

If you have ever been in a Jewish community or market you will likely have seen those long tassels that they wear.  Those are tzitzit, or at least a form of tzitzit. 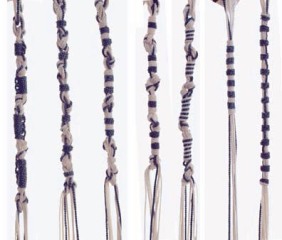 If you are like me and like to research topics, it can be easy to get overwhelmed by the varying traditions, regulations, and opinions on fringe topics like these (pun intended LOL!) However, this is one of the commands that we can really have fun with. Especially if you are the crafty type. Just be careful if you have a daughter like mine, because you will soon have string and beads all over the house.

Regardless of what the traditions say, the bible gives absolutely no description or regulation concerning the construction of tzitzit other than the use of a blue thread. So how you make them is entirely up to you as long as they have a blue thread woven throughout.  I have seen people use all sorts of colors other than white, I have seen knots, braids, wraps, and a combination thereof.

As we try to understand the command to make and wear tzitzit, we find that we have little to go on in scripture. It is really only mentioned in Numbers 15:38 which I started the article out with, and then later in Deuteronomy 22:12

Deuteronomy 22:12 “Thou shalt make thee fringes upon the four quarters of thy vesture, wherewith thou coverest thyself.”

So we have the blue thread mentioned in Numbers, and wearing them on the four corners mentioned in Deuteronomy. That’s it, so don’t get hung up on what all he traditions are, and just have fun being obedient.

Now I will say that traditions are not all that bad, especially if they carry with them a Biblical truth.  This is one of those traditions that I think is pretty clever actually.

Every letter in the Hebrew Language has a numerical value. It’s similar to saying A=1, B=2 etc. Its a bit more complicated than that, but you get the picture. Below is a link to a website that goes into much more detail on this subject if your interested.

I don’t know the whole history behind all of this yet,

but it appears that the Ashkenazi found that if they used a method of tying 7, 8, 11 and 13 wraps it has a total value of 39 which matches the numeric value (gematria) of the Shama; “YHVH Echad” (Yahuah is One). 39 is apparently also the healing number. With that in mind, I’d like to point out that our Messiah received 39 lashes, and Isaiah 53:5 says that “By his stripes, we are healed”.

The Sephardic method uses a different combination of wraps, 10-5-6-5 which equals the gematria spelling of the name of YHVH.

It is interesting to note that if you tie them in the “traditional” way, then you can take the gematria of the word tzitzit which equals 600, and add to that 5 (one for each of the double knots), and then 8 (one for each string) you get 613 which equals the number of commands or mitzvots found in Torah.  So as you can see, aside from the use of a blue thread and wearing them on the four corners of our person, the sky is the limit as to how you tie them.

This command was given due to the willful disobedience of God’s Law.  and when He gave the command He said “And it shall be unto you for a fringe, that ye may look upon it, and remember all the commandments of the LORD, and do them; and that ye seek not after your own heart and your own eyes, after which ye use to go a whoring” Numbers 15:39

This command is for us so that we will remember God’s Law. It is to stand as a constant reminder of our obligation to remain obedient, and to be a witness to us when we are tempted to sin. It also stands as a testimony to others that we have made a pledge to God to walk in His statutes as He has command us to do.

So have fun, try different colors, lengths, and styles. Oh, and ladies… despite what Jewish tradition may say, if you are a child of God, grafted into Israel through faith in Yeshua, then tzitzit are for you as well!