To add or not to add, that is the question…

We know that the sun revolves on a 365.24 something circuit right? Well how then does the 364 day year work?  As with most calendars, even the Gregorian and Hillel II calendars there is a need to intercalate, or add days every so often to keep things aligned. The same thing happens with the Zadok. The question is how?

Since the Zadok calendar is a fixed day calendar beginning with the 4th day every year, the observed equinox would advance a day or two each year, and in five to six years we would be a week behind, thus there appears to be a need to intercalate. So how then do we determine when to add a week to keep us in line? This took a lot of investigation and mapping out the moon and sun movements. 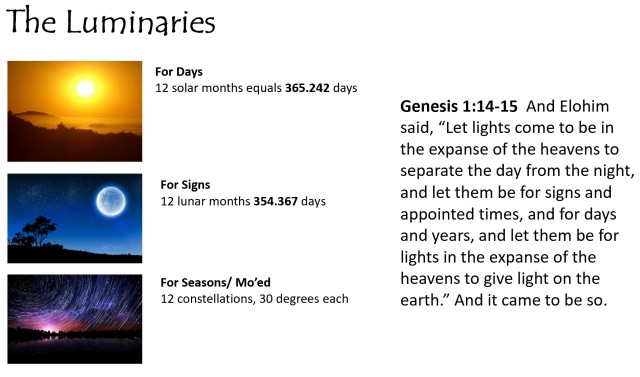 This is a simple method, and one that I refer to as the blind method.  It completely disregards the moon and the stars which I have a problem with because what is recorded for us in Genesis 1.  But as far as being simple goes, this is it.  Basically this method waits for the spring equinox to land on the 4th day and then it intercalates adding a week.  This produces a 5-6-5-6 yearly span between intercalation periods.  The method is not difficult to pinpoint and could be very easily verified using only a calendar and a sun dial. I believe this is the method that the late Jerry Morris kept.  I have provided some links to some vidieos from his yourtube page that Felicia did on the Resources page.

The second method is a way amount more involved, but it brings into play the moon and its alignments with the equinoxes as well.

According to the Book of Enoch we know that the number of day in three years are 1,092, in five years they are 1,898, and in eight years they are 2,912. The interesting thing is, is  this is exactly how this intercalation patterns falls 3, 5 & 8. It is more of a 3+3, 5, 3+3 pattern. It is oddly enough very similar to the 5-6-5-6- pattern of the first method but varies as to when it lands and has an additional 8 year cycle that happens every so often.

Wile mapping out the actual observed alignments, it becomes clear that as we fall behind the spring equinox, the full moon will land within 7 days following the end of the previous 364 day signaling the need to intercalate or add a week to keep us in alignment. This happens nearly every time, proving that the moon is a witness as stated in Psalm 89:37 and Enoch 74:13

Sometime the moon appears to do its own thing and causes a 8 year span between intercalation periods. The 8 year span between intercalation does not happen often, but if it did not happen the distance between the start of the year and the actual equinox would widen. By using this method we are kept very close to the equinox.  And the pattern of the heavenly movements fits Enoch’s description perfectly.

Below is an example showing the alignment that happens during the time of intercalation. 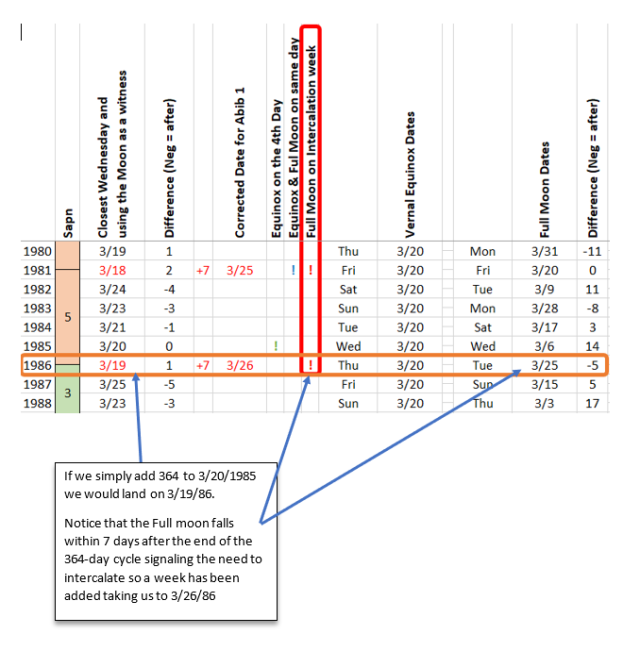 I have personally charted the alignments back for over 200 years and found this pattern fits with some level of accuracy but it is very difficult to chart and verify and almost seems forced in some ways.

There is another anomaly that appears with regards to the moon.  Taking the full and new moon dates given in the Qumran text we can chart them and find an amazing pattern emerge. If we intercalate every seven years and then an additional time in 28 years as the pattern suggests, the lunar cycles follow a 7 year pattern perfectly. Not to mention that the length of the years average out to 365.25 which is astonishing. This method requires some understanding of the Qumran text and the priestly courses to really appreciate, but I believe that it may be closer than the first and second methods simply because we actually have recorded historical data to pull from and compare to.

This method however doesn’t really use the moon to determine intercalation, but rather uses it as a marker to verify its timing. By following the pattern given in the Scrolls it is pretty east to determine when to make the adjustment.

” … to show it from the east. [And] to cause it to shine [in] the middle of heaven, in the foundation [of the creat]ion, from evening till morning. (There is full moon) On the 4th (day) in the week [of the sons of G]amul in the first month of [the firs]t year…

The second year: On the 2nd (day) in (the week of) Malchiah, (corresponding) to the 29th (day of the lunar month which falls) on the 20th (day) in the first (solar month)…

So it develops a 1, 20, 10, 1, 20, 10, 1 pattern for the full moon dates. The pattern for the new moon is the 17th, 1st, 7th, 27th and so on. If we intercalate on the first year of every sabbatical cycle the pattern actually shifts between the two patterns. This happens pretty much without fail and also keeps us within a week of the spring equinox. What is harder to determine is when the additional year of intercalation that has to happen on or around the 28th year must take place.

Since we are only given 4 years of Full moon dats and 3 years of new moon dates we have to do a little interpolation, but the moon is pretty consistent running on a 19 year metonic cycle. Knowing this is helpful indeed because once we isolate the patterns we can determine with a fair amount of accuracy years into the past or future when the lunar phases will actually land.

We are still testing this pattern out to see if it does hold true. What is interesting is that for 2020 the moon actually sets in the same place (within 3 degrees) as the sun on the 24th of March further supporting Enoch and the possible need to intercalate for that year.

Enoch 74:5 On stated months it changes ; and on stated months it makes its progress on each. In two the moon sets with the sun, in those two gates which are in the midst, in the third and forth gate. It goes forth for seven days , and makes its circuit. 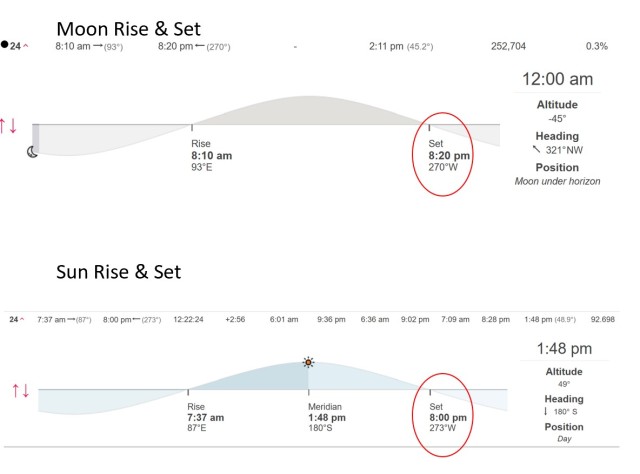 As you can see in the above chart that this conjunction generally occurs BEFORE the 364th day and the beginning of the following year. There are a few anomalies (most of which are probably my error) but this pattern holds true for the most part.  On years that intercalation is required, the conjunction of the setting of the sun and moon in the same location happens AFTER the 364th day. However, when a week is added it reverts back to being before the start of the year!

This method does have some problems as they all do, but it definitely holds closer to the recorded information that we have in the Scrolls than the other methods do. It also doesn’t keep to any single sign but rather takes into account the whole which allows for a more rounded conclusion.

I realize that these are not the majority views concerning intercalation, however, one cannot simply disregard the moon or the stars when looking at the calendar.  These heavenly bodies were given for signs, moed (appointed times), days and years. It is NOT just a solar calendar and I personally believe after spending a great deal of time with this, Enoch is absolutely correct when he says,

“The moon brings on all the years exactly, that their stations may come neither too forwards nor too backwards a single day; but that the years may be changed with correct precision …”

The other thing that is interesting to note in scripture is that in Psalm 81 a festival that included both the חדשׁ Chodesh (renewing) and the כּסא  Keseh (full moon) are referenced to as a “law for Yisra’el, and a right-ruling of the Elohim of Ya’aqob”.

Psalm 81:3 Blow a shofar in the renewing (Chodesh), at the full moon (Keseh) for the day of our festival.

Where else in scripture are we commanded to “observe” the months? It’s only in the chodesh of Abib that we are commanded to do so in Deuteronomy 16:1. This further illustrates that observing the solstices and the fall equinox and adjusting the calendar to them is simply not commanded. Plus in doing so one would disturb the 7 day sabbatical cycle that was establish at creation.

These are just a couple of the methods and alignments that appear to be significant in regards to the calendar. Nevertheless, I also believe that there are other various alignments of the heavenly bodies which play a significant role in regards to the calendar, but I have yet to make additional connections. Regardless, this calendar definitely appears to be established primarily upon the WORD of Yah and then confirmed by the witnesses, not the other way around; and that pattern makes the most logical sense to me form a scriptural standpoint.

All alignments aside there are still several issues regarding intercalation that have not been made clear.  Unfortunately there is no published record of how the Zadok priests actually intercalated, or if they even did for that matter. Therefore understanding how this effects the priestly courses and the beginning of the year is no easy task.

So for now we are simply waiting on Yah to provide an answer. Even if it is day by day, month by month and year by year, we are okay with that.

But for those that seek to know what we currently follow. For the moment we are following Method #3.  The determination to keep to that method was done by casting lot, as were our first steps in observing the Zadok Calendar. The results of that lot carried a .04 probability with each of the men drawing the same number. That’s enough for me to go on knowing that “the lot is cast into the lap, but the whole disposing thereof is of YHVH.” Proverb 16:33